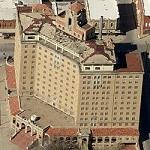 The building has 14 stories (which puts it on the international list of skyscrapers), 452 rooms, two complete spas, and claimed to be the second U.S. hotel with a swimming pool and the first Olympic-size swimming pool in the United States.

The building was in constant use from 1929 to 1963, including a three year period during World War II in which it served as military dependent quarters. The building sat vacant for two years until 1965, when a group of Mineral Wellians re-opened the Baker, but it would not last. The final guest checked out in 1972 and the Baker quickly began to deteriorate.
Links: en.wikipedia.org
1,512 views