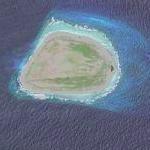 The United States of America took possession of the island in 1857, claimed under the Guano Islands Act of 1856, and it became a British Overseas Territory from 1886 to 1934. Its guano deposits were mined by U.S. and British companies during the second half of the 19th century. In 1935, a short-lived attempt at colonization was begun on this island, with a population of four in the settlement Meyerton—as well as on nearby Howland Island—but was disrupted by World War II and thereafter abandoned. Feral cats were eradicated from the island in 1964.

American civilians evacuated in 1942 after Japanese air and naval attacks during World War II; occupied by U.S. military during World War II, but abandoned after the war; public entry is by special-use permit from U.S. Fish and Wildlife Service only and generally restricted to scientists and educators; a cemetery and remnants of structures from early settlement are located near the middle of the west coast; visited annually by U.S. Fish and Wildlife Service (July 2000 est.)
Links: en.wikipedia.org
1,079 views