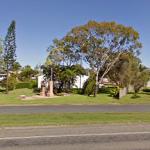 By kkeps @ 2013-12-08 18:27:40
@ -21.219812, 149.147274
Mackay, Australia (AU)
The Bakers Creek air crash was an aviation disaster which occurred on 14 June 1943, when a United States Army Air Forces (USAAF) Boeing B-17 Flying Fortress aircraft crashed at Bakers Creek, Queensland. The aircraft took off from Mackay and crashed approximately 8 kilometres (5.0 mi) south of the airfield. Forty of the 41 military service personnel on board were killed. The crash was Australia's worst aviation disaster by death toll and was the worst accident involving a transport aircraft in the south-western Pacific during World War II.
Links: en.wikipedia.org
633 views