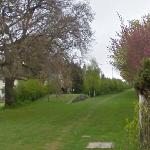 What's left today:
The station building has been demolished, but the goods shed and goods platform are still there.
Links: www.disused-stations.org.uk
480 views

Bealach - Ballaugh means a 'way' of a route for travelling- maybe through hills, mountains, forests, or other obstacles.

It was not any old cow-track! and denoted a principal route or major way of travelling, on foot or horseback or other conveyance. Often, in Ireland, such routes became the basis for military roads to facilitate the movements of military forces with their animals, ordnance and bag and baggage.

There are many 'Ballaughs' in Ireland. as townland names or place-names.

My 'Ballaugh' ( outside Abbeyfeale, Co. LImerick) is derived from the Irish, 'Bealach Beithe' - The Way of the Birch. Birch-woods abounded in this area in ancient times; these were a considerably valuable possession and, of course, have long since disappeared from the landscape.

Anonymous
@ 2012-08-21 07:26:42
I forgot to mention that there is a disused railway station nearby; this is a private residence and the old buildings and platform are still in situ. The lines were sadly torn up some years ago and flogged for re-use - abroad, it is said.

The name of this disused railway station is 'Devon Road Station' and its name derives from the fact that the Earl of Devon was once the landlord of the area.

There is a fantastic walking trail along the route of the old railway track. It is called the Great Southern Trail (GST) and is a wonderful facility for walkers and cyclists. Look it up! A real jewel!