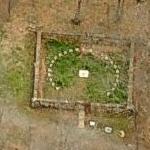 By mlc1us @ 2009-05-25 08:31:02
@ 39.132161, -77.52735
Leesburg, Virginia (VA), US
The diminutive Ball’s Bluff National Cemetery is located approximately two miles from the Town of Leesburg, in Loudoun County, Va. Land for the half-acre cemetery was acquired through donation in 1865, and the government received a quitclaim deed from the original owner’s heirs in 1904. Because of its location and size, the cemetery has never required a superintendent.

Within the cemetery, which is enclosed by a brick wall, lie the remains of 54 soldiers who died during the Battle of Ball’s Bluff. The remains are interred in 25 graves, and the only known interment is James Allen of Co. H, 15th Massachusetts Infantry.
Links: www.cem.va.gov
686 views