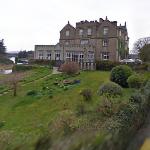 By kuressaare @ 2011-09-04 12:16:37
@ 53.460307, -9.861574
Killeen, Ireland (IE)
Ballynahinch Castle, one of several castle manors established by the infamous "Ferocious O'Flaherty" clan, was home to "The Pirate Queen of Connemara", Grace O'Malley, who married Donal O'Flaherty in 1546. After Donal died in a feud with the neighboring clan, Grace returned to her childhood home at Clew Bay, leaving the Ballynahinch estate to be inherited by her son Owen. Queen Elizabeth's lackey, Sir Richard Bingham, was later appointed govenor of Connaught and began vicious attacks against Irish rebels. His onslaught included an attack on Ballynahinch in which Owen was murdered.

The castle as it stands today has been built and rebuilt and renovated many times over the centuries, but still retains its charm in a beautiful setting along a river that flows from Lough Ballynahinch to Galway Bay. Patrick O'Flaherty, a many-generation descendent of Grace and Donal, still manages the castle and surrounding estate.

In order to log this site, please send answers to the following question: in the castle is a portrait of Grace O'Malley shown at the height of her pirating years. In what room is this portrait located?
Links: www.ballynahinch-castle.com
1,133 views