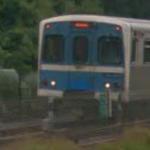 The Baltimore Metro has just one single Line, connecting the Johns Hopkins Hospital with Owings Mills. The Baltimore Metro's cars were manufactured by the Budd/TransitAmerica Red Lion plant in Northeast Philadelphia. Most were delivered in 1983, with a supplementary set of essentially identical cars being purchased in 1986 for the line expansion. The cars, marketed by Budd as the Universal Transit Vehicle, are identical to those used on the Miami Metrorail, because the two agencies built their systems at the same time and saved money by sharing a single order.
Links: www.urbanrail.net
523 views