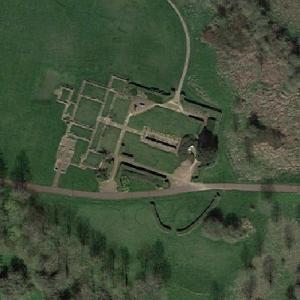 By Drudii @ 2017-09-13 11:25:45
@ 52.05536, -0.79466
Milton Keynes, United Kingdom (GB)
Bancroft Roman Villa is a Roman villa in the Bancroft district of Milton Keynes in modern-day England. The house was originally a winged-corridor house that later became a grand villa with mosaics and formal gardens. Remains of the first farmhouse date back to the 1st century. It was replaced by a larger house in the 3rd century and in the 4th century, the geometric mosaics were added to many of the rooms.

The villa has since been reburied for preservation. Modern stonework marks the outline of the villa and its rooms, the fish pond was reconstructed and the mosaics were removed and are on display in Central Milton Keynes Shopping Centre.
Links: en.wikipedia.org
625 views