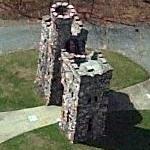 This Tower was erected by Stephen Salisbury III in honor of George Bancroft. When Salsbury died, the tower was donated to the Worcester Art Museum, which in turn donated it to the Worcester Parks Department in 1912.
Links: en.wikipedia.org
973 views