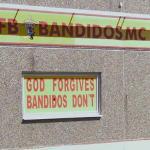 The Bandidos Motorcycle Club, also known as the Bandido Nation, is a "one-percenter" motorcycle gang and organized crime syndicate with a worldwide membership. The club was formed in 1966 by Don Chambers in Texas. Its slogan is We are the people our parents warned us about. It is estimated to have 2,400 members in 210 chapters, located in 16 countries. The club considers itself to be an Outlaw Motorcycle Club. The Federal Bureau of Investigation as well as the Criminal Intelligence Service Canada have named the Bandidos an Outlaw Motorcycle Gang.
Links: en.wikipedia.org
840 views