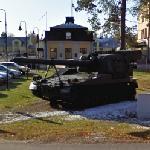 By alfjon @ 2010-01-24 14:28:22
@ 65.818536, 21.664771
Boden, Sweden (SE)
The Bandkanon 1 (bkan 1) was a Swedish self-propelled artillery vehicle in use with the Swedish Army from 1967 to 2003. It was developed by Bofors under the designation artillerikanonvagn 151 (akv 151) and the chassis was based on the never adopted KRV tank. When the KRV project was canceled the chassis of the self-propelled gun was re-designed to use the same drive train as the S-tank. Bkan 1 was one of the world's heaviest self-propelled artillery vehicles in use during its service and since the engines were dimensioned for the lighter S-tank the bkan was somewhat underpowered. Despite this it had very good mobility.

It had an exceptionally high rate of fire, being able to fire 14 shells in 45 seconds. With one round already loaded in the gun beside the two seven-round clips in the magazine, the rate of fire rose to 15 rounds in 45 seconds. The magazine could then be reloaded with a built in hoist in about 2 minutes. Each shell had a weight of 47 kg and a tactical range of 25 km. The gun was designed to fire tactical nuclear rounds, but as Sweden decided to not produce nuclear weapons, this feature never came into use.
Links: en.wikipedia.org
482 views