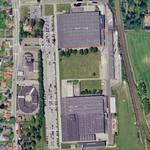 In 2004 the company opened a factory in the Czech Republic where it employs approximately 250 staff producing mainly audio products.
Links: en.wikipedia.org
870 views