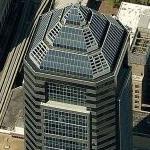 By kkeps @ 2012-03-04 06:46:51
@ 30.32826667, -81.6595842
Jacksonville, Florida (FL), US
The Bank of America Tower is a 617 ft (188 m) skyscraper in downtown Jacksonville, Florida, United States. It is the tallest building in Jacksonville, and the ninth-tallest in the state of Florida (the tallest eight all being in Miami). It was built as the headquarters of Barnett Bank and originally named Barnett Center, but the name was changed in 1997 when Barnett was acquired by NationsBank, which soon merged with BankAmerica. Completed in 1990, the building is the tallest building between Atlanta and Miami. The 42-floor structure was designed by German-American architect Helmut Jahn and is constructed of reinforced concrete.
Links: en.wikipedia.org
569 views