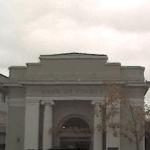 By kkeps @ 2008-10-24 18:34:28
@ 38.005777, -122.290463
Pinole, California (CA), US
"The first Bank of Pinole was organized in 1905 by E.M. Downer, Sr. and located in the George Fraser building on San Pablo Avenue between Tennent and Fernandez Avenues. A new limestone neoclassical structure was built across the street in 1915, and remained in use as a bank until the 1960s when it was sold to the Pinole-Hecules Youth Memorial Incorporated by Mechanics Bank. In 1975 the building was purchased by the City of Pinole for $1, with the stipulation that it continue to be used as a youth facility. The building was again sold in 1992 to the Pinole Redevelopment Agency after it was deemed structurally unsafe due to damage from the 1989 Loma Prieta earthquake. The $250,000 received by the city for the transaction was set aside in a fund earmarked specifically for youth purposes. In 1995 the Redevelopment Agency funded the retrofit and renovation of the Old Bank building, which reopened for commercial use in 1996."
Links: www.waymarking.com
554 views