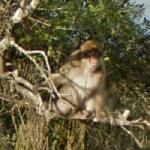 By Mike1989 @ 2012-12-16 03:54:54
@ 36.124913, -5.345311
Gibraltar, Gibraltar (GI)
The Barbary macaque (Macaca sylvanus), or common macaque, is a species of macaque with no tail. Traditionally found in the Atlas Mountains of Algeria and Morocco along with a small population of unknown origin in Gibraltar, the Barbary macaque is one of the best-known Old World monkey species.[citation needed] Besides humans, they are the only free-living primates in Europe. Although the species is commonly referred to as the "Barbary ape", the Barbary macaque is actually a true monkey.
Links: en.wikipedia.org
736 views