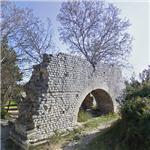 By kjfitz @ 2010-08-05 11:02:44
@ 43.704916, 4.721466
Fontvieille, France (FR)
The Barbegal aqueduct and mill is a Roman watermill complex located on the territory of the commune of Fontvieille, near the town of Arles, in southern France. The complex has been referred to as "the greatest known concentration of mechanical power in the ancient world". Another similar mill complex existed also on the Janiculum in Rome.
Links: en.wikipedia.org
792 views