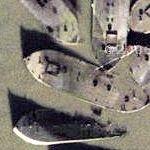 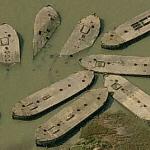 During the Second World War, steel was in short supply. Governments in the UK and the US ordered the construction of barges made of reinforced concrete.

The barges now abandoned on the Thames mud at Rainham were towed across the channel as part of the immense project to create artificial harbors for the Normandy landings on D-Day. They formed part of one of the Mulberry harbors.

Then in 1953 they came to the rescue a second time when they were used to shore up the flood defenses of the estuary which were damaged by a huge storm and surge tide. Towns along the river estuary were inundated and devastated by the worst Thames floods in living memory.

Now the barges are slowly rotting way on the north bank of the river.