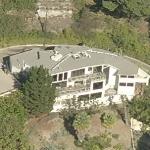 The ninth overall pick of the 1999 MLB Draft played collegiate baseball at USC and the University of California-Santa Barbara. Zito made his major league debut in July 2000 and spent his first seven seasons with Oakland. He signed a seven-year, $126 million contract with the Giants prior to the 2007 season.
Links: en.wikipedia.org, losangeles.blockshopper.com
2,919 views