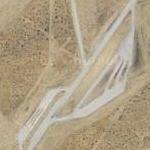 The Barstow Marine Corps Logistics Base serves as a storage, distribution and maintenance depot for Marine Corps facilities in the Pacific area and western portions of the United States. Equipment, weapons and supplies are warehoused, repaired, remanufactured and redistributed at this active base, which is the primary Marine Corps facility with this function west of the Mississippi. The depot is composed of three locations east of Barstow: The 2,000 acre Yermo Annex; the Main Base at the Nebo Facility, two miles west of the Yermo Annex; and in between the two, south of Interstate 40, the Marine Corps Rifle Range. All together, the Marine Corps Logistics Base covers over 4,000 acres, and employs 2,500 people. Direct rail links to Los Angeles and San Diego, and the intersection of major interstate highways continue to make this a strategic location. There are several nearby Marine Corps facilities served by the Barstow Logistics Base: the 900 square mile Twenty Nine Palms Combat Center is 25 miles to the southeast; Camp Pendleton, with its population of 50,000 is 100 miles south; El Toro Air Station is less than 100 miles away; and less than 150 miles away is the San Diego Recruit Depot where 23,000 Marines are trained every year.
Links: clui.org
1,723 views