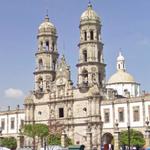 By adrbr @ 2010-04-19 15:48:24
@ 20.721672, -103.391246
Guadalajara, Mexico (MX)
Different tribes of indigenous people populated the territory of Tzapopan around the 12th century A.D. After their arrival in 1492 the conquistadors led by Nuño Beltrán de Guzmán conquered this area in 1530. Missionaries soon followed and in 1541, under the direction of the Spanish king, the town of Nuestra Señora de la Concepción de Tzapopan (Our Lady of the Immaculate Conception of Tzapopan). Local legend has it that the Virgin interceded between the Spanish and the native population during the conquest, convincing the local population to lay down their arms and convert to Christianity.
Links: en.wikipedia.org
566 views