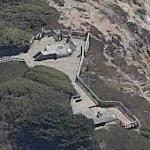 By kjfitz @ 2007-02-19 16:27:22
@ 37.71364, -122.50321
San Francisco, California (CA), US
FUNSTON GROUPMENT COMMAND POST: On the edge of the bluff, west of the parking lot. It is now part of a scenic overlook, but without any interpretive signage indicating to the dozens of people who visit each day exactly what it was. Intact, with rear entrance secured & obscured by heavy foliage. Chronic, albeit minor graffiti carved & written with magic marker onto it. The observation port is partially open, resulting in much litter being put inside.

Approximately 100 feet south of the Funston Group CP, this BES is incorporated into the same wooden overlook platform, and also without any historical interpretation nearby. Walk-in entrance in rear is secured & obscured by heavy foliage, the structure is intact, albeit with typical minor graffiti, and litter dumped inside the partially-open observation port. Top hatch is secured shut.

With the modernization of coastal defenses in the early 1900s came a new system for aiming artillery. Prior to this time, guns were aimed on sightings taken directly at each battery.

The modern era brought electricity, improved communications, and allowed sightings to be made from widely spaced pairs of observation posts, called base-end stations. Data was sent to a central post where it was converted to aiming instructions and transmitted to each gun battery.
Links: www.cdsg.org
939 views