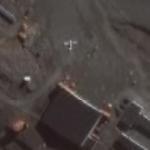 Base Presidente Eduardo Frei Montalva is the most important Antarctic base of Chile and one of the most important ones in Antarctica. It's located at Fildes Peninsula, an ice-free area, in front of Fildes Bay (Maxwell Bay), west of King George Island, South Shetland Islands. It's located alongside the Escudero Station, and only 200 meters from the Russian Bellingshausen Station. Its geographical coordinates are 62°12′0″S, 58°57′51″W, and it is located at an altitude of 10 meters above sea-level. It's located at the Antarctic territory claimed by Chile (Antártica Chilena Province, Magallanes y la Antártica Chilena Region).

It has a 1300 meters long airstrip, with 50 intercontinental and 150 intracontinental flights each season, serving as a means of transport to many bases around.

It also includes the Villa Las Estrellas residential area that has an hospital, a school, a bank, a small supermarket, etc. The maximum population during summer is of 150 people, and the average during winter is of about 80 people.

It began to operate in 1969 as Centro Meteorológico Eduardo Frei. When the installations were expanded, it was renamed as "Base Teniente Rodolfo Marsh", with the meteorology center keeping its original name. During the 1990 decade, all of the installations came to be named Base Presidente Eduardo Frei Montalva.
Links: en.wikipedia.org
1,249 views