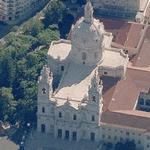 By adrbr @ 2008-03-04 20:07:18
@ 38.713063, -9.160506
Lisbon, Portugal (PT)
the Basilica da Estrela. Its striking position and gleaming white dome make it resemble the National pantheon, which is situated considerably further to the east but whose dome causes them to be easily confused, and which is a prominent point of reference in a panoramic overview of Lisbon.

The church is regarded as the most important sacred building in the Portuguese capital dating from the second half of the 18th century Queen Maria I ordered the construction of the church. She had taken a vow to have a church built if she bore a son and thus a successor. Her son José was born but died, however, two years before the church was completed.
675 views