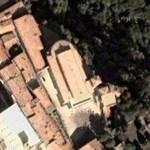 By DonMartini @ 2006-02-24 12:52:04
@ 43.937187, 12.447633
San Marino, San Marino (SM)
Building commenced in 1826 using the designs of the architect from Bologna Antonio Serra at the site of the old parish that was demolished to make way for the new one. This fact was a great offence to the history of art because it saw the cancellation of one of the first ever Christian monuments in Italy of a pre-romanesque style. The actual basilica that was consecrated in 1855, is of a neo-classic style with a porch of Corinthian columns. The solid bell tower that was already Romanesque was re-built in the year 600. The inside is made up of three aisles and seven altars, on the left side of the high altar you can admire the throne of the Regent Captains, work that was undertaken in the year 600; underneath the altar a small urn containing the bones of San Marino; on the right hand side is a marble monument with a silver casket that contains the upper part of the Saints cranium. Situated to the right of the basilica we find the little XVI century church of San Pietro, rearranged around about 1826. Entry is gained through the vestry or by means of a staircase that has been carved out of the bell tower of the high basilica.
949 views