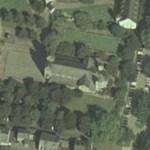 By DonMartini @ 2006-04-28 09:18:46
@ 50.362235, 7.60461
Koblenz, Germany (DE)
In the more ancient part of Koblenz stand several buildings which have an historical interest. Prominent among these, near the point of confluence of the rivers, is the church of Saint Castor, with four towers. The church was originally founded in 836 by Louis the Pious, but the present Romanesque building was completed in 1208, the Gothic vaulted roof dating from 1498. In front of the church of Saint Castor stands a fountain, erected by the French in 1812, with an inscription to commemorate Napoleon's invasion of Russia. Not long after, Russian troops occupied Koblenz; and St. Priest, their commander, added in irony these words: "Vu et approuvé par nous, Commandant russe de la Ville de Coblence: Janvier 1er, 1814."

The treaty of Verdun, which divided up the Carolingian empire, was signed here in 843.
764 views