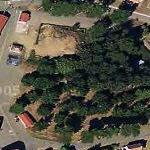 By kjfitz @ 2005-07-16 01:55:26
@ 37.802743, -122.472399
San Francisco, California (CA), US
Initially named Battery Howe, this Endicott-era battery was completed and armed in 1895 with four pits, each containing four 12-inch mortars. The battery was built to provide both seaward and harbor defenses against capital ships and other types of warships. The guns had a range of approximately 8 miles. In 1902, the battery was divided to form two batteries; the two eastern pits retained the name of Battery Howe and the two western pits were renamed Battery Arthur Wagner.

Designed in the shaped of a cross, this type of battery is called an "Abbott Cross" or "Quad" after General Henry Abbott, Corps of Engineers, who advocated the use of mortars for seacoast defense. The four other mortar batteries in Harbor Defense San Francisco differ by being linear in design. This battery was capable of all-around fire (360 degrees) and could target the entire water area within range as well as beaches and land. The mortars were dismounted in 1920.
Links: www.nps.gov
729 views