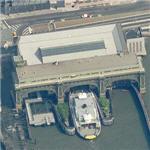 By kjfitz @ 2008-06-12 15:26:02
@ 40.70108, -74.011523
New York, New York (NY), US
David Byrne uses a retrofitted, antique organ as the control station for the musical instrument. Instead of using wind forced through pipes, each of the organ’s keys are connected by a multitude of tubes, pipes and wires to every conceivable facet of the building. Playing the organ causes various devices to hammer on water pipes, vibrate motors against the ceiling girders, magnetically beat against the building’s roof columns or blow air through pipes. The 99 year old previously disused space is converted into a cast-iron orchestra, conducted by Byrne or any other person who wishes to play.
Links: scribol.com
702 views