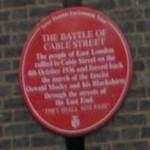 By Dania @ 2009-06-18 16:21:06
@ 51.510603, -0.068438
London, United Kingdom (GB)
The Battle of Cable Street or Cable Street Riot took place on Sunday 4 October 1936 in Cable Street in the East End of London. It was a clash between the Metropolitan Police Service, overseeing a legal march by the British Union of Fascists, led by Oswald Mosley, and anti-fascists, including local Jewish, socialist, anarchist, Irish and communist groups. The majority of both marchers and counter-protesters travelled into the area for this purpose. Mosley planned to send thousands of marchers dressed in uniforms styled on those of Blackshirts through the East End of London, which had a large Jewish population.
Links: en.wikipedia.org
533 views