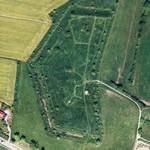 By Dania @ 2009-07-29 03:39:25
@ 54.908365, 9.750645
Dybbøl, Denmark (DK)
The Battle of Dybbøl (Danish: Slaget ved Dybbøl; German: Erstürmung der Düppeler Schanzen) was the key battle of the Second War of Schleswig and occurred on the morning of April 18, 1864 following a siege lasting from April 7. Denmark suffered a severe defeat against the German Confederation which decided the war. Dybbøl was also a battlefield in the First War of Schleswig.

On the morning of April 18, 1864 at Dybbøl, the Prussians and Austrians moved into their positions at 02:00 am. At 10 a.m. the Prussian artillery bombardment stopped and the Prussians charged. Thirteen minutes after the charge, the Prussian infantry had already seized control of the first line of defence of the redoubts.

A total massacre of the retreating troops was avoided and the Prussian advance halted by a counterattack by the 8th Brigade, until a Prussian attack threw them back; that attack advanced about 1 km and reached Dybbøl Mill. In that counterattack the 8th Brigade lost about half their men, dead or wounded or captured. This let the remnants of 1st and 3rd Brigades escape to the pier opposite Sønderborg. At 13:30 the last resistance collapsed at the bridgehead in front of Sønderborg. After that there was an artillery duel across the Alssund.

During the battle around 3,600 Danes and 1,200 Prussians were either killed, wounded or disappeared. A Danish official army casualty list at the time said: 671 dead; 987 wounded, of which 473 were captured; 3,131 unwounded captured and/or deserters; total casualties 4,789. The 2nd and 22nd Regiments lost the most. Also, the crew of the Danish naval ship Rolf Krake suffered 1 dead, 10 wounded.

The Battle of Dybbøl was the first battle monitored by delegates of the Red Cross: Louis Appia and Charles van de Velde.