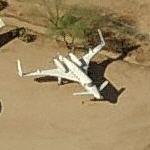 By kjfitz @ 2007-11-17 10:17:14
@ 32.138115, -110.868461
Tucson, Arizona (AZ), US
The Beechcraft Starship is one of the most technologically advanced aircraft of its type. Designed in 1982 by well known aircraft designer Burt Rutan’s Scaled Composites the Starship is the first all composite pressurized business class aircraft. The design featured a variable sweep forward wing or “canard,” an all glass cockpit, in which traditional instruments are replaced by computer screens, and two rear mounted pusher turboprop engines. Rutan’s company built an 85% scale proof of concept aircraft while Beechcraft began design of the full-scale prototype. While Rutan’s concept plane flew in 1983 the full size aircraft suffered from production delays, design changes and other problems that pushed its first flight to March 1986. Production of the Starship began in 1988 and a total of 53 were built by 1995 when production was halted. Despite its revolutionary design the Starship was a commercial failure. Many of the aircraft never found buyers and were leased out by Raytheon, which had bought out Beechcraft during the design of the Starship. By 2004, only two or three Starships continue to fly, the rest having been consigned to the scrap yard or museums.
Links: pimaair.org
715 views