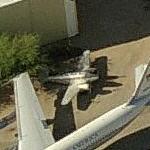 By kjfitz @ 2007-11-17 10:20:44
@ 32.138884, -110.867008
Tucson, Arizona (AZ), US
Based on the successful Beech Model 18 airliner the AT-7 was used by the Army Air Forces to train Navigators during World War II and for a number of years after the war. Three students and an instructor were carried on each flight. Each student had a desk similar to the one he would work from in a bomber or transport and they took turns practicing their navigational skills. The primary difference between these aircraft and a standard Beech 18 is the addition of an astrodome behind the cockpit for the students to use while working on celestial navigation problems.
Links: pimaair.org
660 views