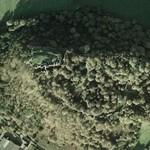 It is rumoured that treasure belonging to Richard II lies undiscovered in the castle grounds, but the many searches that have been carried out have failed to find any trace of it. The castle, now in ruins, is a Grade I listed building and a Scheduled Ancient Monument, owned by English Heritage.
Links: en.wikipedia.org
551 views