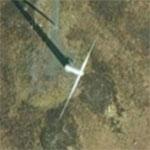 It was named after Jessica, following a letter she wrote to npower renewables saying "I can see the wind farm from my house. I think they look like angels. Could you call one of your angels after me, Jessica?"

The wind farm consists of 14 wind turbines each of 600 kilowatts (kW) maximum output, manufactured by Bonus Energy A/S of Denmark and has a combined maximum power of 8.4 megawatts (MW).
Links: www.rwe.com
517 views