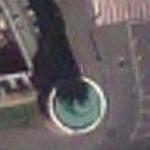 By kkeps @ 2011-12-31 12:48:25
@ 55.749796, 37.623265
Moscow, Russian Federation (RU)
The Beklemishevskaya Tower (Russian: Беклемишевская башня, also known as Москворецкая башня, or Moskvoretskaya Tower) is a corner tower on the southeastern side of the Moscow Kremlin on the Moscow River. The tower was built in 1487-1488 by an Italian architect Marco Ruffo (known as Mark Fryazin in Russia). It was named after a boyar Ivan Bersen-Beklemishev, whose house had been adjacent to the tower from the Kremlin side. The Beklemishevskaya Tower was constructed for protecting the ford and the crossing over the Moscow River. There was the so called "listening" vault underneath the tower, which was used for preventing the enemy from tunneling his way to the Kremlin. The Beklemishevskaya Tower is 46.2 m in height. During the October Revolution of 1917, the top of the tower was damaged by a shell. It was restored a year later by an architect I.V. Rylsky.
Links: en.wikipedia.org
490 views