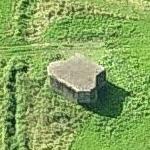 By kjfitz @ 2007-05-28 01:09:11
@ 51.021619, 4.52089
Mechelen, Belgium (BE)
The KW line, or “Dyle” line as it was referred to by the Allies, covered Brussels and connected the PFA with Namur. It ran from the fort of Koningshooikt near Antwerp to Wavre (hence the name: KW) along the marshy Dyle valley, a natural tank barrier. A total of 235 pillboxes were built there in the winter of 1939-1940. The KW bunkers were all medium-type machine gun bunkers armed with two firing ports positioned to give flanking fire. Most had overlapping fields of fire. Like most bunkers the Belgians built in the thirties, the works were camouflaged or made to look like sheds and small houses through the use of paint, planking and light brick walls. Though well conceived and protected by an anti-tank barrier formed of Cointet gates and rail fields from Koningshooikt to Leuven and the flooded Dyle valley from Leuven to Wavre, the line had little depth: In most places, the bunkers formed a single line, backed up with clusters arranged for all-round defence in the second echelon.
Links: niehorster.orbat.com
7,615 views