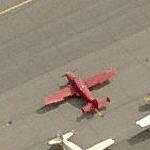 By Parabellum @ 2008-11-22 14:26:34
@ 45.863599, -95.389093
Alexandria, Minnesota (MN), US
The Bellanca 14-13 Cruisair Senior and its successors were a family of light aircraft manufactured in the United States after World War II. They were a follow-on from the pre-war Bellanca 14-7 and its derivatives. While retaining that family's basic design, the 14-13 featured an enlarged cabin, a flat-4 engine in place of a radial (this feature was first introduced on the prototype 14-12) and an oval vertical endplate on each horizontal stabiliser. This latter feature gained the type the nickname "cardboard Constellation", because the arrangement was similar to the contemporary Lockheed Constellation airliner, and the Bellanca wing was constructed of wood (the fuselage was welded steel-tube framework, cloth-covered).
Links: en.wikipedia.org
397 views