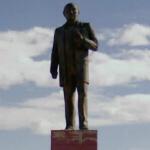 He is the namesake of Ciudad Juárez which changed its name from Paso del Norte in 1888 in honor of the fact that Benito Juárez sought refuge there during his struggles against the French occupation.
Links: en.wikipedia.org
451 views