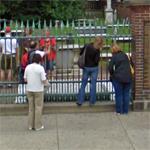 Franklin was one of the Founding Fathers of the United States. He lived a full life, as he was a leading author, printer, political theorist, politician, postmaster, scientist, musician, inventor, satirist, civic activist, statesman, and diplomat.

A tradition of tossing pennies onto his grave is meant to bring good luck. This is in direct contradiction to Franklin's famous phrase "A penny saved, is a penny earned".
Links: en.wikipedia.org
936 views