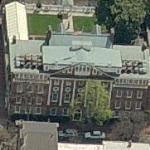 Halcyon House is a Federal-style home in Washington, D.C. Located in the heart of Georgetown, the house was built beginning in 1787 by the first Secretary of the Navy, Benjamin Stoddert. Its gardens were designed by Pierre L'Enfant, and for several decades in the early 19th century Halcyon House was the center of much of Washington's social life.
Links: en.wikipedia.org, en.wikipedia.org
875 views