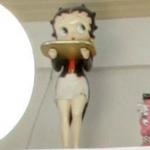 By kjfitz @ 2013-02-10 15:44:27
@ 34.101354, -118.343041
Hollywood, California (CA), US
Betty Boop is an animated cartoon character created by Max Fleischer, with help from animators including Grim Natwick. She originally appeared in the Talkartoon and Betty Boop film series, which were produced by Fleischer Studios and released by Paramount Pictures. She has also been featured in comic strips and mass merchandising. Despite having been toned down in the mid-1930s to appear more demure, she became one of the most well-known and popular cartoon characters in the world.

Betty Boop made her first appearance on August 9, 1930, in the cartoon Dizzy Dishes; the sixth installment in Fleischer's Talkartoon series. Although Clara Bow is often given as being the model for Boop, she actually began as a caricature of singer Helen Kane. The character was originally created as an anthropomorphic French poodle.
Links: en.wikipedia.org
693 views