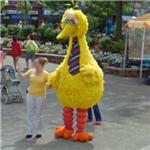 Officially performed by Caroll Spinney since 1969, he is an eight-foot two-inch tall bright yellow bird. He can roller skate, ice skate, dance, sing, write poetry, draw and even ride a unicycle. But despite this wide array of talents, he is prone to frequent misunderstandings, on one occasion even singing the alphabet as one big long word (ABC-DEF-GHI), pondering what it could ever mean. He lives in a large nest behind the 123 Sesame Street brownstone and he has a teddy bear named Radar, after Walter "Radar" O'Reilly of M*A*S*H, who had a teddy bear and was also lovably naive and innocent. Radar was given to Big Bird by Gary Burghoff when he guest starred on the show. Later on, however, it was said that Big Bird got the bear as a gift from Mr. Hooper.
Links: en.wikipedia.org
967 views