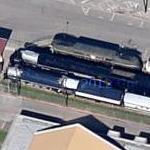 By kjfitz @ 2006-10-19 22:07:16
@ 32.782841, -96.763667
Dallas, Texas (TX), US
They are often proclaimed as the largest steam locomotives ever built, but that title is quite controversial — there were heavier locomotives, and possibly more powerful locomotives. However, without tender, the Big Boy's locomotive body was the longest of all of them and fully loaded with water and fuel the Big Boy was the heaviest of all of them, even though the locomotive without tender was lighter than some. However, the Big Boy is in the running in every category, and it certainly could be said to be the most successful of the giant locomotives.
Links: en.wikipedia.org, www.museumoftheamericanrailroad.org
2,676 views