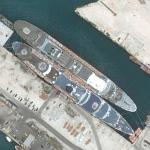 Big Red Boat III was launched in 1961 as Transvaal Castle of the Union-Castle line. She was transferred to the South African Marine Corp (UK), remaining on the same service under the British flag, with Union-Castle Line crew and management as S.A.Vaal in 1967. From 1977 she served various cruise lines under different names ending up as Big Red Boat III with the Premier Cruises. She was laid up in Freeport in 2000 and was was sold for scrapping in Aalang in 2003.

Renaissance was originally Rotterdam (launched 1958) of the Holland America Line until 1997 when she was sold to Premier Cruises and renamed Rembradt. She has since changed owners many times and is being restored to be permanently docked at Rotterdam some time in 2007. She can also be seen at Gibraltar in this map. Picture of both ships at Freeport here.
Links: www.simplonpc.co.uk
1,292 views