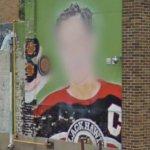 On that fateful day, Chicago was trailing the New York Rangers at Madison Square Garden by a score of 6-2 in the third period. After Mosienko scored a goal 6:09 into the period, his center, Gus Bodnar, won consecutive faceoffs which led to Mosienko's second and third goals at 6:20 and 6:30. Remarkably, Bodnar won another faceoff and fed the puck to Bill, who rang a potential fourth quick goal off of the goal post. The hat trick spurred the Hawks to come back to win 7-6.

The previous hat trick time record was 64 seconds in 1938 by Carl Liscombe. The closest anyone has come to Mosienko's 60+ year-old record was Jean Beliveau's 44 second trick in 1955.