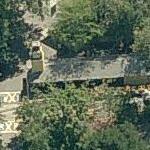 For 71 of his 83 years, Billy Jones was a railroad man. He was 13 when he started as a "roustabout" for the Southern Pacific Railroad Company. Fifty of those 71 years were spent on the SP while the remainder dealt with a love project for children of the Santa Clara Valley and his hobby. On his ranch at the corner of Daves Avenue and Winchester Blvd. in Los Gatos, Billy constructed the Wildcat Railroad as the result of a rare purchase… the old "Number 2", a prairie type locomotive from the Venice Miniature Railway, Venice, California. Jones began construction of his own railroad in 1941. In 1943 the first round trip was made in his orchard and for the next 25 years, children of all ages in the Santa Clara Valley enjoyed the thrill of riding behind a real steam engine.

After Billy's death in 1968 many of his friends, both adults and children, petitioned the Los Gatos Town Council to save the railroad. A group of businessmen formed a non-profit corporation to purchase the railroad from the Jones estate and relocate it in a corner of Oak Meadow Park and a portion of Vasona Park in Los Gatos. The corporation managed to raise the money needed for the purchase of the equipment through fund raising activities by many interested friends, service clubs, youth groups, fraternal and religious organizations.

An all-volunteer construction project started early in 1969 with the transferring of equipment from the Jones ranch to the park complex. Prior to the "big move" an engine house and car barn facility in the park had been completed to house the equipment. Track laying had gotten underway at the same time. On July 26, 1970 a golden spike was driven into a Laurelwood tie and the new Billy Jones Wildcat Railroad began operations.
Links: bjwrr.org, en.wikipedia.org
1,023 views