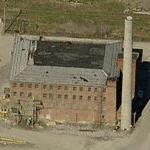 By Parabellum @ 2007-07-22 09:28:02
@ 40.855022, -79.906834
Butler, Pennsylvania (PA), US
"The first jeep prototype (the Bantam BRC) was built for the Department of the Army by American Bantam in Butler, Pennsylvania, followed by two other competing prototypes produced by Ford and Willys-Overland. The American Bantam Car Company actually built and designed the vehicle that first met the Army's criteria, but its engine did not meet the Army's torque requirements. Plus, the Army felt that the company was too small to supply the number needed and it allowed Willys and Ford to make second attempts on their designs after seeing Bantam's vehicle in action. Some people believe that Ford and Willys also had access to Bantam's technical paperwork."