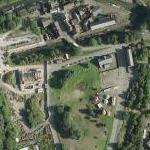 By kjfitz @ 2010-04-07 15:46:12
@ 52.522442, -2.076518
Dudley, United Kingdom (GB)
The Black Country Living Museum (formerly The Black Country Museum) is an open-air museum of rebuilt historic buildings, located in Dudley in the West Midlands of England. The museum occupies a 105,000 square metres (26 acres) urban heritage park in the shadow of Dudley Castle in the centre of the Black Country conurbation. It was first opened in 1978, on land partly reclaimed from a former railway goods yard, disused lime kilns and former coal pits; and since then many more exhibits have been added to it.

The Museum preserves some notable buildings from around the Metropolitan Boroughs of Dudley, Sandwell and Walsall and the City of Wolverhampton; mainly in a specially built village. Most of the buildings are original, relocated from their original sites. As a living museum, these form a base from which volunteers portray life in the nineteenth and early twentieth centuries.

The Museum is constantly changing as new exhibits, especially buildings in the village, are being added.
Links: en.wikipedia.org
862 views