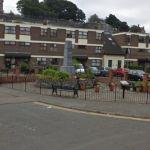 By giove @ 2010-06-17 09:42:28
@ 54.996846, -7.325464
Derry, United Kingdom (GB)
Bloody Sunday was an incident on 30 January 1972 in the Bogside area of Derry, Northern Ireland, in which twenty-six unarmed civil rights protesters or bystanders were shot by the soldiers of the 1st Battalion of the Parachute Regiment of the British Army, under Lt. Col. Derek Wilford, during a Northern Ireland Civil Rights Association march. Thirteen men, seven of whom were teenagers, died immediately or soon after, while the death of another man four and a half months later has been attributed to the injuries he received on that day
Links: en.wikipedia.org
723 views