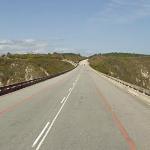 Constructed between February 1980 and June 1983, the bridge stands at a height of 216m above the Bloukrans River. Its central span is 272m and the bridge is 451m in length in total.

Its primary use is that of a road bridge, carrying national route N2.