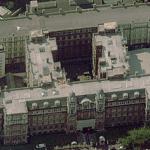 Blythe House was used as a location for television series in the late 1970s and early 1980s, including Minder and The New Avengers. The building is featured extensively as the fictional headquarters of MI6 in the 2011 film Tinker Tailor Soldier Spy.
Links: en.wikipedia.org, moviemaps.org
993 views